Initiated by suffragettes and labour activists in Europe, the first International Women’s Day was organized in March 1911. While respect for the equal rights and place of women in society has come a long way since 1911, there is still plenty of work to do on gender equality.

Edmonton has long history when it comes to advancing gender equality; most notably Emily Murphy and the Famous Five’s campaign to lead the Persons Case to victory in 1929. But the history of women in Edmonton is much deeper than the Famous Five alone. To mark International Women’s Day 2018, we took a look back at five ECAMP stories of inspiring women right here in Edmonton, their pursuit of an equal place in Edmonton’s public life, and their contributions to building our city. 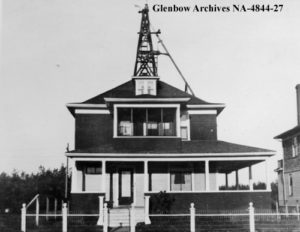 In an era where women were not considered persons under the law—let alone considered qualified to be working as scientific professionals—Eda Owen was named as the Provincial Agent and Weather Observer for Alberta. From her home in the Highlands, the England-born settler spent 28 years meticulously recording weather conditions in Edmonton and faithfully compiling reports from other stations across Northern Alberta and the Northwest Territories.

GWG employed a large female workforce; a few men were also employed there as well. However, duties were assigned by gender. Men were generally employed as cutters and pressers while women worked as sewing machine operators. Women’s wages were lower than men’s: “In general, notes historian Linda Kealey, ‘women’s work in the clothing trades was labeled unskilled or less skilled then men’s, and the sexual division of labour was reinforced by low wages.” 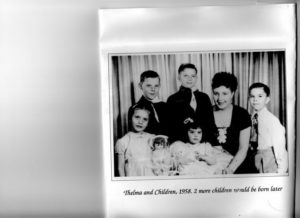 As a child of the Depression, Thelma’s first decade was one of both scarcity and abundance, as the world around her tightened its proverbial purse strings, she was shown the value of cooperation and community, sacrifice and solidarity. Upon this foundation, a truly incredible woman was built; a Métis matriarch who has brightened the world and served all people by standing up for children, women, the elderly, families and the larger Métis nation.

In Episode 3, writers Daood Hamdani and Richard Awid, and the Canadian Council of Muslim Women’s Zohra Husaini tell the story of the Al Rashid and the multi-faith effort to build “the real Little Mosque on the Prairie”. 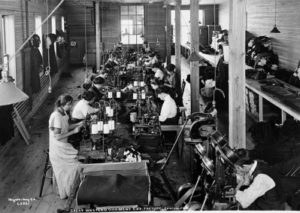 Edmonton’s busiest wartime factories, the Great West Garment Company, provided an essential wartime service, and the 500-some workers were unable to resign unless they were enlisting. Over five years, the factory produced about 6.5 million military clothes and became the British Empire’s largest garment manufacturing company. Of the factory’s workers—who worked in three shift segments, 24/7—87 per cent of workers were women.

For more fascinating stories documenting the history of women in Alberta, head on over to the Alberta Women’s Memory Project.