What do you get when you combine two historians, an artist, and many local communities? YEG Tales! Supported by a ECAMP Partnership Demonstration micro-grant, the YEG Tales team met with numerous local cultural groups, connecting over their stories and reproducing them in comic book form! We spoke with historian Leslie Holmes about what they learned about art, story, and building relationships in Edmonton. 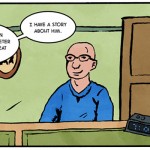 Describe your project in five words.

What gave you the idea for the project?

The three of us have been friends for years (we all worked at Fort Edmonton Park together) and are passionate about Edmonton’s history. Ryan and Tom are huge comic buffs, and we have joked off and on about making a project like this one. I don’t think any one of us ever thought it would be a reality, but one day, Leslie saw the EHC had Partnership Grants and thought the comic project would be a perfect fit. 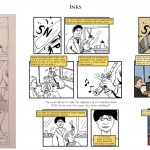 What challenges did you face—and what did you learn—throughout the project?

There were a lot of challenges! I think if we were to give advice to anyone about doing a similar project, it is to give yourself double, or even triple the amount of time you think you’ll need. Our project’s foundation was based on community partnerships, and these took a long time to establish.  It also involved a lot of back and forth and input from our partners, which made the experience rewarding, but also a slower process than if we were on our own. Luckily, at the end of the day, the comics are something we are very proud of and all the work was worth it.

Each comic presented its own challenges, and learning experiences, and ultimately when you are starting this kind of work, you get so much more out of the process than you do out of the final product.

In your opinion, what are the greatest successes and impacts from the project in the community?

We only launched our website in the fall, but so far we’ve had a lot of positive feedback from readers. We have had teachers ask to use the comics as a resource in class, so it is getting out to younger generations too. If we can inspire Edmontonians to be interested in their city’s history, or create awareness about the different kinds of people in Edmonton’s past, then we’ve done our job. 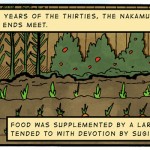 Do you have any future plans to continue the work of the project? How can people become involved?

It is something we plan on doing in the future. Our next step is to add compendiums for each of the completed comics. Completing all the comic art was a lot of work for Ryan, so Tom and Leslie agreed to give him a break for a while. In the meantime, interested people can contact us through our new email! yegtales@gmail.com!

What advice do you have for individuals or organizations in Edmonton looking to undertake projects that share Edmonton’s story?

Do it! Just get the ball rolling. There are people and organizations out there that also want to do the same thing, and you won’t ever know the possibilities until you start the process. We had this crazy idea, and even though it changed over time, the end product is collaborative, and something different to open Edmonton’s history to new audiences. And comics make everything better. Period. 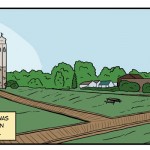