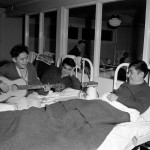 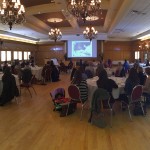 It has been two years since the Truth and Reconciliation’s National Event in Edmonton, but our city is still figuring out how to reconcile different narratives of important people, places and events.

A key part of this for many in the community is the complicated history and legacy of the Charles Camsell Hospital. It has become clear that there were often vastly different experiences and memories of the institution, which began as an Indian Hospital in 1946 and then became a Provincial General Hospital in 1980.

On Friday, April 1, 2016 the Edmonton Heritage Council invited a diverse group of people to the Santa Maria Goretti Centre with one aim: to explore the many sides and stories of this site from its early days through to its decommissioning in 1996. Elders, former patients, academics, as well as heritage and health professionals gave presentations and worked together in facilitated groups, all to increase our general understanding and think of ways this history can be accessed, shared and acknowledged. A delegation from the Kitikmeot Heritage Society came from as far away as Cambridge Bay, Nunavut. There was also the opportunity to hear from Gene Dub, the principal architect involved in the redevelopment of the site, and his plans to cleanse the site through ceremony, and commemorate the site’s history with a healing garden.

Everyone understood it was just a beginning step, with much discussion and collaboration still to come. Still, everyone involved said it was a step in the right direction. 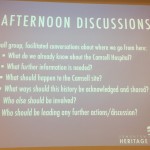 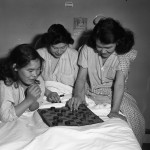 Danielle Metcalfe-Chenail is Edmonton’s former Historian Laureate as well as a freelance writer and speaker. Her books include For the Love of Flying, Polar Winds: A Century of Flying the North and the recently released anthology In This Together: Fifteen Stories of Truth & Reconciliation (Brindle & Glass, 2016). www.daniellemc.com