In late May and early June 2015, Historian Laureate Danielle Metcalfe-Chenail traveled to Ottawa to present at the Canadian Historical Association’s 2015 Conference and to participate in the Truth and Reconciliation Commission’s closing events. In this guest blog post, she shares her experience of truth and reconciliation in the nation’s capital.

When I applied for the EHC’s grant program this spring, I knew the travel was necessary for my professional development as a historian in the city working on, among other things, understanding the complex history and legacy of the Charles Camsell Hospital. What I don’t think I recognized was how this week of unexpected learning and connections would affect me personally.

It was steamy outside as I walked to the University of Ottawa’s campus to hear Justice Murray Sinclair’s Big Thinking talk. It was part of Congress, the huge confluence of scholars from the social sciences and humanities in Canada. Two hundred people packed the auditorium, straining its air conditioning. When the University of Alberta’s Cindy Blackstock introduced Sinclair, the Chair of the Truth and Reconciliation Commission, the applause went on and on. When Sinclair spoke, however, and showed us survivor testimony, it was silent – beyond the sniffles and rustles of people digging around for Kleenex. I was amazed this man and the other two commissioners, Dr. Marie Wilson and Chief Wilton Littlechild (a residential school survivor himself), managed to cope over the past six years, hearing thousands of such stories. It was right, I thought, that all of us should hold a bit of the pain, a bit of the past, and help carry that burden. 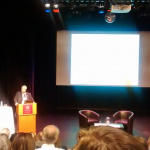 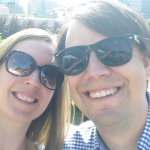 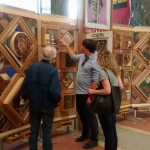 I set my alarm for 3:45am and stumbled in the dark toward Victoria Island in the Ottawa River between the provinces of Ontario and Québec. A sunrise ceremony was being held to light the Sacred Fire that would burn throughout the Closing Events of the Truth and Reconciliation Commission. A cold front had blown in overnight and the dozens of people huddled together on the grass as the Anishnaabe Elders welcomed us to their unceded territory in three languages. I reflected how, growing up in Ottawa, I never considered whose land I was living on. We laughed, shivered, and hoped together under umbrellas and blankets – praying in all our different ways for truth and healing in the days ahead.

The sky cleared by the time the Walk for Reconciliation began. My cousins and I, with their babies and toddlers in tow, marched alongside 10,000 people from Gatineau to Ottawa City Hall. I ran into other Edmontonians, journalists, politicians, and friends from across the country. We sang and clapped as people drummed from the sidelines. 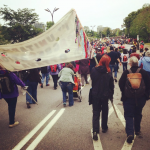 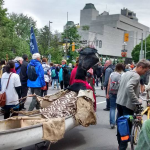 I headed to Congress for a full day of talks that began with a discussion about the soon-to-open National Centre for Truth and Reconciliation in Winnipeg. The first panel was all about record keeping, archives and colonialism; it was heartening to know this was on the radar for so many people, but also dispiriting to learn more about how the TRC’s own statement gathering and record keeping was mired in debates about informed consent, anonymity, and fear of re-victimization. A cautionary tale for all of us working with these types of stories who care about people but also about preserving the past. 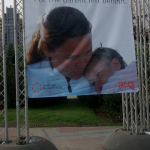 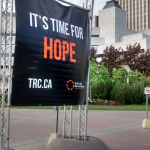 The hotel where I was staying, the Delta, was headquarters for the TRC. At 10:30am, I took the elevator down, planning to listen to Mayor Don Iveson provide an update from Edmonton in the Ballroom. Then I would stay for the Release of the Findings from the Commission. Instead, I could barely elbow my way out of the elevator the lobby was so packed. I flagged down a volunteer and he told me the Ballroom and several overflow rooms were bursting. Even Survivors and Elders from the Northwest Territories were taking over the Penthouse to watch the proceedings livestreamed. I headed back to my room to do the same and found the TRC’s website had crashed. Luckily, folks on Twitter told me it was being broadcast by the CBC. The hotel – the whole country, even? – humming with emotion, I sat and watched and cried and tweeted alongside so many others. My colleagues back in Edmonton posted photos of people doing the same in City Hall, the Edmonton Public Library, and other spaces. A phrase reverberated: We are all in this together. #MyReconciliationIncludes

I gave a talk “Rebranding and Rethinking History” at Congress, on a panel about Practicing the Discipline of History. I talked about my own journey in public history, writing and not really knowing how to label myself. Mostly I talked about creating opportunities for people to connect with history and my attempts to do it out in the open through my Ghosts of Camsell serial blog. How I wanted my work to contribute to social justice and to reconciliation.

I spent that final afternoon in the company of incredibly engaged #twitterstorians and Indigenous Studies scholars. We talked about the challenges ahead as we headed over to Ottawa City Hall to take part in the wrap-up concert. As Buffy Ste-Marie belted out songs we need to hear over and over again, we absorbed the messages of the week. While red dresses fluttered in homage to Missing and Murdered Indigenous Women on stage, we contemplated the roles we could play for positive change. While our eyes traced the contours of the Witness Blanket – the bricks and wood and toys from actual residential schools turned into art – we renewed our pledge to be allies. Not just for Indigenous people but for all Canadians, by engaging with truth telling and reconciliation activities in our Ivory Towers, our communities, and our work. 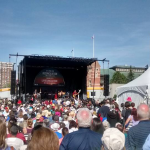 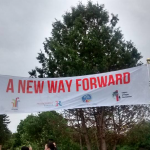 To learn more or get involved with reconciliation in Edmonton:

Danielle Metcalfe-Chenail is Edmonton’s Historian Laureate as well as a freelance writer and speaker. Her books include FOR THE LOVE OF FLYING and the recently released POLAR WINDS: A CENTURY OF FLYING THE NORTH. She is currently editing an anthology IN THIS TOGETHER: FIFTEEN TRUE STORIES OF REAL RECONCILIATION (Brindle & Glass, 2016). www.daniellemc.com