On the evening of Thursday, February 5, roughly thirty people braved a blizzard to attend the inaugural Old YEG Cafe at the Prince of Wales Armouries. This event, put on by the brand-new grassroots organization, Heritage Forward!, centred on a panel discussion around common misconceptions about Edmonton’s heritage buildings.

The organizing committee, which is completely citizen led (sparked by Darren Kirby and Hugh Lee), looked for a balance of opinions on the topic – and a lively chat. To that end, they invited four panelists: Christopher Dulaba, a professional planner and owner of Callidus Development Management; Shirley Lowe, former Historian Laureate and an active heritage advocate; Mike Swick, a Quantity Surveyor who is currently heading the Hanscomb team tracking project costs for the new Royal Alberta Museum (a “glorified estimator”, he joked); and David Percy, who holds the Borden Ladner Gervais Chair of Energy Law and Policy at the University of Alberta and chairs the Old Glenora Conservation Association. I got to emcee the event, and learned a tremendous amount about the realities of heritage conservation in the city, as well as some of the players involved.

The first question I put to them, perhaps unsurprisingly given the topic of the discussion, was: What is the most common misconception around built heritage? Mike Swick was quick to say that heritage preservation is not prohibitively expensive, as some might expect.

Chris Dulaba then noted that developers are not always the ‘bad guys’ as many assume, and that many, like himself, have a passion for architecture, are informed, and perform their due diligence. As an example, he spoke about his company’s involvement with the Crawford Block along Whyte Avenue. He noted that while it is recognized as a heritage property, it is not officially designated. He went on to say that to make it a profitable enterprise they needed to increase the density as well as the height of the building, but successfully integrated those needs within the structure. Finally, he explained how his team met with the Old Strathcona Business Association, Old Strathcona Foundation, and other community stakeholders early in the process to present their proposal and get feedback. 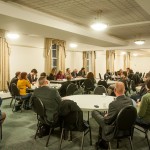 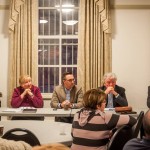 David Percy stated with a shake of his head that people assume the City will do something about a building – which is not always the case. “City officials don’t step in,” he said, “Nor do representatives from the Edmonton Historical Board or Edmonton Heritage Council.”

Percy then went on to argue that there is actually a disincentive for developers to preserve heritage buildings, largely because of provincial tax laws, where owners are rewarded for letting buildings deteriorate. Since the value of the building is lower, their property taxes decrease.

Shirley Lowe said that this is often “demolition by neglect,” and thinks this phenomenon needs to be addressed. She also contended that often developers see a heritage building as a placeholder for something bigger, better, and newer. They, City officials, and citizens more broadly “don’t do measurements well.” They do not often recognize the value of heritage and retention of buildings for economic development and building a sense of place that attracts small businesses, residents, and tourists.

Lowe and others on the panel also said we have a bit of breathing room at the moment, with the downturn in the Alberta economy.

“Heritage buildings are largely better off during recessions”, said Lowe, as there is less pressure to redevelop.

“Yes, 124th Street was a historical accident,” Percy jumped in. During the last bust cycle, the proposed development was abandoned and people “woke up” to the fact of its historical character. It is now seen as a great success story in the city.

During this pause, Percy says Edmonton has an opportunity to improve the state of things, but it needs “massive citizen involvement, volunteers, and cooperation with community leagues as well as private and public sectors.” Right now, Percy notes that the different levels of government are “fragmented, with the Province passing the buck to the City.”

Swick and Dulaba both agreed that offering incentives to developers to reconstruct or renovate – and making them aware of the programs that exist – could also be key. Preservation of the building could be a condition of sale. 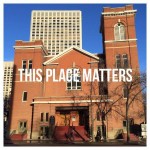 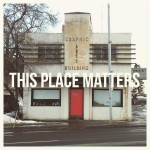 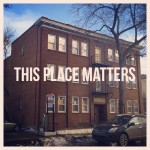 Once the floor was opened to audience questions, it was clear that neighbourhoods from across the city were represented in the room, and that everyone was concerned about infill. One person spoke about intensification of infill in Westmount, while another was dismayed at developers’ “tolerance for crappy architecture” in new builds. All wanted new development to consider context, character, and good design. They wanted planners and developers to ask, “How is this going to fit in and improve the area?”

Lowe suggested a possible moratorium on the destruction of heritage buildings, as Vancouver has done with its historic Shaughnessy neighbourhood. The Heritage Action Plan drawn up in June of last year includes a one-year moratorium on demolition and several recycling requirements.

Percy also suggested looking at the Portland model, given the City’s concern with density and infill. Portland, he notes, is the most densely populated city in North America but still has ten protected heritage areas. The grass is not always greener on the other side, however, a quick Google search shows the city’s Architecture Heritage Centre hosted its own panel this month called “Density without Demolition.”

Clearly these questions are front of mind for many Edmontonians and citizens around the continent who are trying to balance development with heritage. Hopefully through open forums like the Old YEG Cafe in Edmonton – and possibly some virtual field trips to Portland and Vancouver – this discussion can take root and help effect positive change in our city.

Danielle Metcalfe-Chenail is Edmonton’s Historian Laureate as well as a freelance writer and speaker. Her books include FOR THE LOVE OF FLYING and the recently released POLAR WINDS: A CENTURY OF FLYING THE NORTH. She is currently editing an anthology about native-newcomer relations called UNSETTLED (Brindle & Glass, 2016). www.daniellemc.com