The idea of an Edmonton museum has been with us for decades, a project handed from generation to generation.  It’s in our hands now (“our” meaning the collective “we” of Edmonton, but yes, the Heritage Council is providing leadership).  It’s a critical year for the initiative.

If you’ve been following, you’ll know that the idea has evolved over the past 10 years.  Edmonton’s cultural plan, The Art of Living, recommended (after extensive community consultation) the development of a city museum, specifically “strong support for the idea of a City museum as a dynamic, community-driven organization that would interpret large and inclusive themes.” 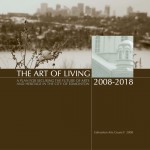 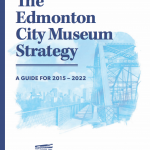 The concept in The Art of Living evolved with a 2012 study that added more detail to the what, why, how and where of a city museum, including an assessment of the Royal Alberta Museum’s Glenora location for its home.  As well, there’s been the idea of creating a “mall of museums” (think Washington D.C.’s national mall Smithsonian approach) bringing existing museums and collections into proximity with each other.  The congregation of existing museums would fall short of being a city museum interpreting “large and inclusive themes”, but the idea had its merits.

The focus is not on a facility or physical location, but on the “dynamic, community-driven organization” face of the work, a strategy updated in 2015 through further community consultation and study. The current face of the initiative, the Edmonton City as Museum Project, draws on the city itself as the “collection” of artifacts, experiences, places and people that make up the layers of Edmonton’s collective history over hundreds, even thousands, of years.  Through tours, programs, podcasts and the story contributions from many Edmontonians, the idea takes shape.  Along with that, the “city as museum” project name is drawn from a talk by urban planner Larry Beasley in 2012, distilled in this quote as a compelling “why?” for the city museum, a place for reflection and connection for the city and its people:

“There is no constant force for ongoing engagement and dialogue between people and the diverse realities of city life. And cities are worse off because of that. I think that force could be the city museum.” 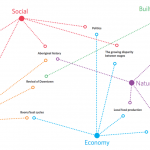 Those who have worked in the museum field will know that this idea of a “collection” that cannot be owned, managed, stored or conserved by an organization pushes through the boundaries of what defines a museum.  The current approach expands the possibilities of reach out into the city across time and space. Fort Edmonton Park interprets Edmonton to 1929.  The Royal Alberta Museum is a provincial institution and only incidentally touches on the city’s experience (we’ll see what the new facility and program brings). There’s a gap in interpreting Edmonton and equally, empowering people to participate not just as audience, but as co-creators of the museum.

There’s lots of opportunity in the “city as museum, museum as city” path, but the challenge of thinking of the museum as a co-creating activity largely outside of the walls pushes conventional notions.  To be clear, the f-word (facility) has not been abandoned and is being re-considered in its scale, but the program and development of the organization is the key right now.

As for the internal workings, the project staff and volunteers are working on detailed business case to take to the wider community and City Council later this year.  To bring this idea forward, we need to create the independent organization that can support and sustain the spirit of the project and the dream of a city museum.

So, where does that leave the future city museum?

For Edmontonians, whether amateurs, professionals and in between, you can continue to participate in this through ECAMP. For Edmonton’s museum and heritage organizations, there are the same and additional opportunities and we’d love to talk about what we can do together right now. The city museum is not an exercise in Soviet-style central planning, but one of experiment and adaptive change to make the right kind of museum for Edmonton and one that can grow with the city.  In working together, we’re going to fail on occasion, but we’re going to fail forward, and learn and build together. 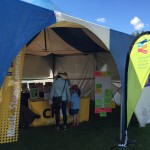 Visitors young and old and from all walks of life have something to add to a pop-up museum. 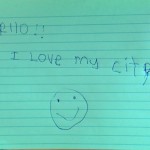 A friendly message at an ECAMP pop-up

For the latest updates on city museum development and Edmonton City as Museum Project programming, subscribe to the monthly ECAMP newsletter, which hits inboxes on the last Thursday of every month!