In this guest post, Tori McNish reflects on her visit to the Museum of Vancouver’s c̓əsnaʔəm exhibition and asks what museums in Alberta can learn from its creation.

Images courtesy of the Museum of Vancouver. 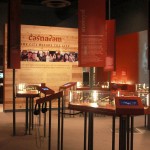 Images courtesy of the Museum of Vancouver.

A topic explored throughout the Institute that was of particular interest to me was the exhibition cəsnaʔəm, the city before the city and our accompanying workshop with Larry Grant, a Musqueam Elder. c̓əsnaʔəm is a fairly new exhibition at the Museum of Vancouver that incorporates the historical thinking concepts. The museum partnered with the Musqueam First Nation to design and develop the exhibition, an important ancestral village located in the unceded Coast Salish territory of Vancouver. An array of bone, stone, and shell objects from the site, as well as many videos with Musqueam, serve as “great catalysts for conversations about the relationship between Indigenous and settler societies in Vancouver”1. Explicitly addressing Vancouver’s history of colonialism, and the museum’s role in it, the exhibition “aims at ‘righting history’ by creating a space for Musqueam to share their knowledge, culture and history and to highlight the community’s role in shaping the City of Vancouver”2. 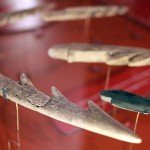 Artifacts at c̓əsnaʔəm, the city before the city. Courtesy of the Museum of Vancouver. 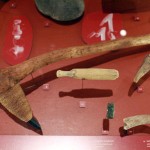 Artifacts at c̓əsnaʔəm, the city before the city. Courtesy of the Museum of Vancouver.

Although Alberta and British Columbia have different histories, there are many parallels in the relationship between Aboriginal and settler societies. In Alberta, the fur trader or the pioneer often serve as the “beginning” in our story of human history. This exhibition at the Museum of Vancouver stands out as a model that we can strive to emulate. The story of c̓əsnaʔəm, and, consequently, and story of the Musqueam, were, prior to this exhibition, largely lacking in the museum’s telling of the history of the area. Similar stories, like those of the Papaschase and Michel Band’s, exist in Alberta, and also deserve to be told by their people in Alberta’s story.

Hallmarks of the ‘big six’ historical thinking concepts that can (and should) be utilized in museums include evidence, historical perspectives, and, perhaps most importantly, the ethical dimension. Throughout the institute we discussed the hesitation many history teachers and museums feel at addressing ethics within the study of history. As an ongoing relationship, it is even more important that the aspect of the ethical dimension be forthright and clear, as I saw in the Museum of Vancouver’s exhibition.

The museum community in Edmonton and area can learn much from their experience, with two specific “lessons” that stand out in my view. Firstly, partnering, rather than consulting with, groups whose stories you would like to tell in your museum gives agency for people to tell their own stories, and secondly, not shying away from your museum/ community’s historical involvement in practices (i.e. colonialist) that may now be seen in a negative light. 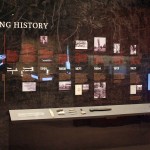 Courtesy of the Museum of Vancouver.

Tori McNish is a graduate student in the Master of Museum Education program at the University of British Columbia, and currently works at the Musée Héritage Museum in St. Albert as an Education Programmer.