As EHC Program & Operations Manager Ericka gets ready to head to MuseumCamp 2015, she reflects one final time on what she learned last summer at MuseumCamp 2014 in Santa Cruz. Here she writes about the hands-on work applying rapid prototyping to a local arts centre and the lessons she learned through the work. Click to view her first and second posts on the topic. 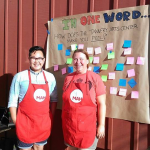 Our first task was strategically selecting a location, which drove the development of a hypothesis. Jason and I formed a mean team and were able to steal away the Tannery Arts Centre from our fellow campers.

The Tannery is a large space with multiple buildings that housed the historic Salz Tannery until 2001. In 2002 there was a county movement to create new living and work spaces for artists in an effort to keep them from fleeing the area’s high cost of living. The Tannery’s mission is to “provid[e] an affordable, accessible and sustainable home for Santa Cruz County artists and arts, cultural, education and heritage organizations so that all offerings on this historically significant campus may be enjoyed by residents, visitors and the general public.” One hundred artist apartments opened in 2009 to much fanfare and a two-year waitlist, while the 28 work studios opened in 2012 with very few vacancies.

Based on the Tannery’s mission, we decided on the following hypothesis:

The Tannery provides a stable, secure, and safe environment for artists through three areas of support: financial/economic, social/community, and artistic/creative. With increased stability, artists are able to increase their creative output or innovation.

In order to test our hypothesis quickly, we decided to measure the following indicators:

We measured these indicators by engaging residents and tenants through the following ways: conducting an online survey that was distributed to the residents of the Tannery Arts Center, conducting on-site interviews with Studio artists and Artist residents, meeting with the Santa Cruz Arts Council staff, and finally conducting a social experiment where we asked attendees of the First Friday event (residents and non-residents) at the Center to describe in one word how the Tannery Arts Center made them feel. 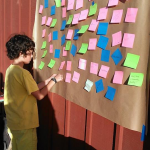 Interestingly, through our work we discovered our assumption that the Tannery provides increased financial stability was not necessarily true. Survey respondents reported spending more of their income on housing than they did before they moved to the Tannery.

This lead to us believe that the Tannery offers other incentives to moving there, such as community support and an enhanced artistic environment. We learned that artists in the Tannery have increased their artistic output, which has lead to increased reliance on income from art—income that may be less than they were able to acquire in non-arts related labor—which could account for the reduction in disposable income. But in spite of reduced financial resources, artists reported higher sense of general stability and willingness to take risk.

Another important lesson we learned was that although the infrastructure existed and was in use, the arts community had not become as developed and integrated as we had expected (e.g., across disciplines, increase in collaborations, etc…).

Overall, the Tannery demonstrates that developing a community not only takes a space or facilities, but also requires years of program funding so that active and ongoing efforts can be created to develop and build the capacity of the community.