Please join Friends of Royal Alberta Museum Society and Edmonton Heritage Council for a virtual conversation with Adriana A. Davies, who will discuss her new book From Sojourners to Citizens: Alberta’s Italian History. Dr. Davies’s talk will be followed by a live audience Q & A. 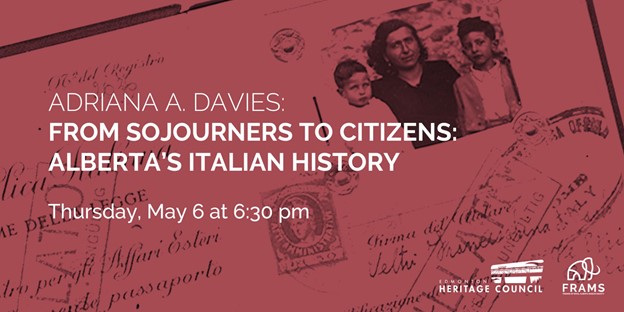 Please join us for a virtual conversation with Adriana A. Davies who will discuss her new book From Sojourners to Citizens: Alberta’s Italian History. Followed by a live audience Q & A.

Bringing to life the untold story of Italian immigrants in Alberta from the 1880s to the present.

From Sojourners to Citizens: Alberta’s Italian History places Italian immigrants in the narrative of province building from work on railways, mines and other industries to breaking the land for agriculture. Oral history excerpts allow the men, women and children to speak for themselves. What emerges is an unquenchable desire to make good, and overcome intolerable working conditions and discrimination, which culminated with enemy alien designation and internment during the Second World War. The book also provides an exploration of the impact of the Government of Canada’s multicultural policy on the process of assimilation for the post-war influx of immigrants. It offers a prototype of an immigrant community’s movement from marginalization to the mainstream.

For more than 40 years, she has worked as a researcher, writer, editor, lecturer, executive director and curator in England and Canada. Professional accomplishments include: Science and Technology Editor, The Canadian Encyclopedia; Executive Director, Alberta Museums Association; and creator and Editor-in-Chief of the Alberta Online Encyclopedia. In 2009, the 84 multimedia websites were gifted to the University of Alberta. In 2020, Adriana Davies was the inaugural recipient of EHC’s Heritage Writers’ Reserve Award.

Dr. Davies’s accomplishments include From Realism to Abstraction: The Art of J. B. Taylor (2014); The Rise and Fall of Emilio Picariello (2016); and the anthology The Frontier of Patriotism: Alberta and the First World War (2016). From Sojourners to Citizens: Alberta’s Italian History (Guernica 2021) places Italian immigrants in the narrative of Canadian nation building.

About the image in the event banner: Detail of passport belonging to Franca (Veltri) Cavaliere including sons Paul (left) and Rodolfo (Rudy) (right). Photo courtesy of Rudy and Rita Cavaliere.