Leading into the launch of Edmonton Living Rooms‘ traveling public exhibit, project lead Azkaa Rahman speaks with the exhibit’s designer, Marina Hulzenga, to learn about her background and the process that went into designing an exhibit sharing the unfolding story of seven Edmonton refugee communities. 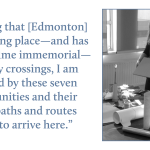 Marina Hulzenga was born in Edmonton, Alberta in 1982, and is a grandchild to Dutch immigrants. She currently resides and works in Edmonton.

Marina’s work traverses the spheres of spatial design, curation and design research. Working with a variety of mediums, Marina is absorbed in collecting and research as a means to creativity; with her work focusing on uncovering details and connections within our spatial awareness that are often overlooked. With this approach she creates spatial experiences that open up a third space for exchange and debate.

Studying exhibition design at MacEwan University initiated Marina’s professional design career, working as an exhibit designer at both the Royal Tyrrell Museum and Royal Alberta Museum. Marina then completed a BDes in Public Space design at the Design Academy Eindhoven in the Netherlands, where she took part in two group exhibitions. Marina is a recent recipient of the Edmonton Arts Council’s Individual Project Grant and is exhibiting in The Works Art & Design Festival 2017.

Greatly influenced by my rural Canadian upbringing (being raised in the southwest woods outside the city of Edmonton, Alberta and next to the Enoch Cree Nation) the essence of my work not only invokes interactions between space, land, history and environment but also hints at the reminders we have of our fragile and humble place within such a landscape.

A professional background in exhibit design influences my desire to have my projects tell a certain story: to celebrate a history, listen to the land and constantly engage the philosophical, conceptual and social dialogues of our spatial surroundings.

In the search for truth and reconciliation, I believe deeply in the power of knowledge. I believe through knowledge a progression of understanding and equal acknowledgment can manifest where colonialism and ignorance has left their wounds.

What inspired you to work on the Edmonton Living Rooms project?

As a spatial designer focused on the landscapes we traverse and the intersections that our movements over these landscapes create, I am struck by this project. Being a grandchild of Dutch immigrants I am familiar with the notion of being connected to another distant place, which has lead to my own journeys of trying to understand identity as connected to this landscape, to this city.

Revering that it is a meeting place–and has been for time immemorial–of many crossings, I am inspired by these seven communities and their many paths and routes taken to arrive here. Imagine the many journeys we can all learn from!

What are some of the challenges you’ve experienced on this journey thus far?

Being part of the team who is challenged, but also entrusted with receiving, gathering, knowing these community’s stories and voices and then working through the process of translating these stories into a spatial design that will continue to communicate with the same intent and hopes in which they were given.

For me the challenge lies in being the creative channel for these stories to not only communicate but also connect with other members of this city. Finding the balance between design, material, form and honouring the journeys, lives of these seven communities.

What have you come to appreciate?

The space of in-between that each community and its members live in. The continual balance of “back home” and this home; the beautiful way in which they continue to traverse and navigate that tension of life before and life now. Feeling a sense of pride to be part of this place, but a deep sense of happiness to know their children “miss our food,” as one mother shared. I have come to appreciate the struggle that is keeping this balance; it is not easy to dwell in this space of the in-between.

There have been quite a few! But all are connected to the time spent within the communities. Listening, learning, laughing with each person I have met on this journey so far. Being blessed to hear so many stories of the heart. Seeing in someone’s eyes the trials behind the words. By being present I have received so many gifts, so many moments of growth and widening.

What are you hoping comes out of the traveling exhibit?

My hope for this exhibit is that it will be a place where all are welcomed and invited into the stories and journeys’ of these seven communities. That it will open up a space for intersections to be created and revealed, intersections of different cultures, traditions, languages, but also intersections with preconceived notions and assumptions. To learn what the journey of a refugee or immigrant to this city feels like and to find in their stories a place where you can see yourself.

I suppose, that I am a part of the growing tapestry of this city. That each story, each voice, each journey has been weaved into this complex place we call home, Treaty 6 territory, Amiskwaciy Waskahikan, Edmonton.

Edmonton Living Rooms is a Governor General’s Award-nominated exhibit project developed by the Edmonton Heritage Council (EHC) and the Multicultural Health Brokers Co-Op (MCHB), supported by the Government of Canada’s Canada 150 Fund. A combination of storytelling, art, and material culture, Edmonton Living Rooms shares the unfolding story of seven Edmonton refugee communities and reflects our country’s evolving cultural identity during Canada’s sesquicentennial. Visit facebook.com/yeglivingrooms for the latest information on where you can find the exhibit in Edmonton.