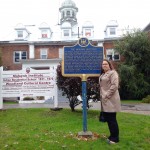 My visit to the Mohawk Institute (Mush Hole) and Woodland Cultural Centre in Brantford, Ontario.

As someone who is still fairly new to the formal heritage sector, I am constantly learning more about the heritage community and its operating norms. And as an Indigenous person, I continually struggle with the emphasis placed on built heritage as our primary link to the past and where we come from as a community.

I recently had an opportunity to attend and present at the National Trust for Canada’s annual conference, held in Hamilton in conjunction with the Canadian Association of Heritage Professionals. Throughout the conference, there was a strong focus on heritage in its built form, but there was also an intentional shift to consider the Indigenous history that comes before the buildings when referring to our collective past. The tension between traditional ways of thinking about built heritage and learning from the Indigenous community in this time of reconciliation was tangible in almost every presentation, workshop, and session at the conference.

Similar to last year’s National Trust conference in Calgary, they started this year’s event with a one-day Indigenous Roundtable. The presenters included local Elders and knowledge keepers from the neighbouring Mississaugas of the New Credit and the Haudenosaunee Confederacy of Six Nations of the Grand River as well as heritage and urban planners who are working to acknowledge and include this history in planning within the City of Hamilton. As a visitor from Treaty Six Territory, it was interesting to me to see how Indigenous cultures are being recognized and incorporated, or not, into the development of urban centres elsewhere. 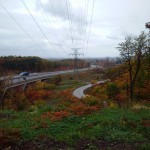 Hamilton is built upon traditional territory that was not part of any treaty agreement and some land is still disputed today. The next day as part of the pre-conference, I went on a tour of known historical Indigenous use sites where modern-day infrastructure, like freeways and sewer storage facilities, are now the dominating feature. For me the question becomes, how are we honouring this history in the story we tell about our own heritage if there is no formal legal requirement to do so?

From these opening sessions prior to the start of conference, this narrative continued in a variety of ways. Throughout the next two and a half days, I witnessed presenters, panellists, and participants dance around the issue of reconciling this layered past through recognition but not yet through integration. For the heritage sector, this is where reconciliation will ultimately take place – when heritage in the built form is not separate from or in opposition to the oral traditions of a territory. 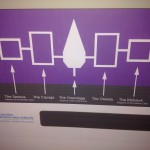 The Aionwá:tha Wampum Belt, representing the five nations of the Haudenosaunee Confederacy.

When reflecting on the conference and the many people I met in Hamilton from across Canada, the theme of these varied stories keeps coming up for me. I want to live in a place where the stories about who we are and who was here before us intersect with who we want to become. For me, this is where our heritage lies. As one presenter put it, “heritage takes place between the person and the environment they are in. Heritage lives in the interactions.”

Here in Edmonton, the EHC has been supporting the City of Edmonton’s work on River Crossing in Rossdale to create a heritage interpretative plan for the site. I see this particular project as a way for us all to challenge our own understandings of heritage norms and for the built heritage narrative to co-exist with the many stories this layered land shares with us. It is not either/or, but rather both that tell the truth about our city’s heritage. 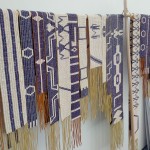 Various Wampum Belts of the Six Nations of the Grand River, telling the story of treaty agreements in the territory.